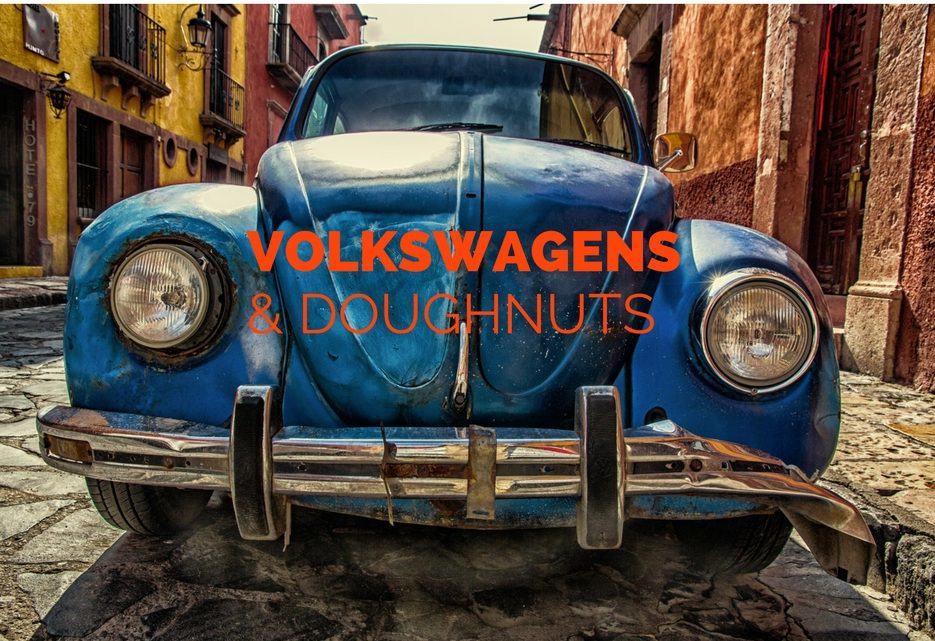 When I was in college, I had 1968 Volkswagen Beetle. I loved that car.

One day I was getting out of my car in the parking lot of my dorm when another student came up to me and said, “I like your car” then pointed to his VW Beetle that about the same model. He said,  “My name’s Rick, but everyone calls me RC”. RC ended up being one of my better friends in college. We just kind of bonded around Volkswagens.

But the thing that remember and learned the most from my friend RC was how to sell doughnuts.

Back in the early 1980’s if you bought 50 dozen doughnuts from Krispy Kreme, you could get them for $1 a dozen. RC somehow or another knew this fact and taught me how to start a doughnut selling business to make some extra cash.

You could fit exactly 50 boxes of doughnuts on the back seat of a 1968 Volkswagen Beetle.

When RC introduced this concept to me, he has already worked out several “doughnut routes” that he did each week. He would simply go into businesses and workplaces and say, “I’m a college student just working my way through college, would you like to buy fresh doughnuts?  They are only $2 a dozen.”

After RC had me ride with him on one of his routes to show me how to do it, I started doing the same thing.  And pretty much every week after that the rest of that semester I worked the doughnut route that I created.

When I think back  about that experience of selling doughnuts using my Volkswagen as a rolling doughnut shop, I am acutely aware of some wonderful lessons that have helped me immensely in my journey into private practice and owning a small business.

So Volkswagens and doughnuts have taught me this…

Always be willing to seek and accept the help of others.  If RC had not shown me how or offered to help me with the problem of needing cash as a poor college student, I would not have had the success that I did with the little doughnut business.

Be willing to think outside the box and look for creative ways to create unique ways of doing things and solving problems. Who knew that Volkswagen could also be a doughnut shop!

Be willing to do the hard stuff even if it puts you outside your comfort zone.  I’m an introvert and “selling” anything was not in my comfort zone.  But I did learn to just offer something people wanted and ended up not really having to sell anything.

Be persistent and consistent.   By making myself get up at 4 o’clock in the morning to go pick up doughnuts created stream of income that was totally driven by me.

Foster and develop relationships.  It is the heart and soul of marketing anything.  You have to have that face to face contact.  Also be willing to tell your story.

Probably the main reason people bought doughnuts from me was because they saw me consistently and knew I was just trying to make some income while going to college.  Not because they wanted doughnuts.

When I look back, at that time in my life and those cold mornings I would make myself get up and do the doughnut route, I am so grateful that I pushed myself and allowed myself to go through those little struggles.

So as you begin or grow your private practice, or any business for that matter,  give yourself permission to think outside the box and draw on those unique life experiences that teach us so much….

Enjoy the journey and learn from it!