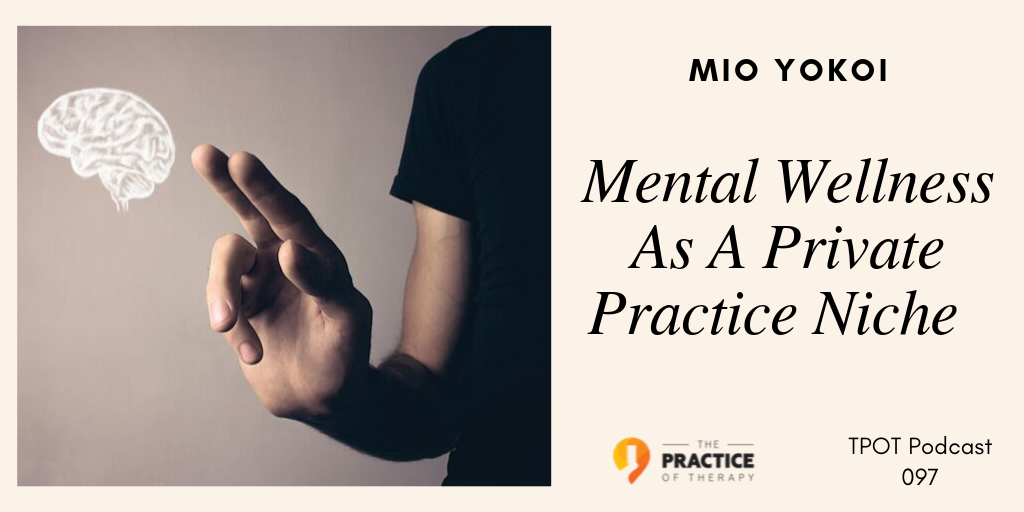 In this episode, Gordon speaks with Mio Yokoi, a registered psychotherapist, podcaster and Supporter of Growth. First, Mio explains why mental health needs to be an ongoing discussion rather than something people only are concerned about when in distress. Then, Mio describes how she was fortunate enough to get her private practice website up and running over ten years ago; age is helpful when Google is ranking websites. Stay tuned to hear some ways Mio has diversified her income, and Mio explains the ways she has overcome the obstacles that come along with starting a podcast.

Mio Yokoi is a registered psychotherapist, podcaster and Supporter of Growth, based out of Toronto, Canada. Her main goal is to serve meaningfully, through working with clients in her private practice and by consulting with other helping professionals to help them be of service in the most ideal way possible for them.

Her podcast, Life Stuff 101, is devoted to sharing stories and insights to inspire as many people as possible to make their mental and emotional wellness a top priority.  Her website is Solidwellness.org.

Mental Health Should be an Ongoing Concern

When Mio first started her practice ten years ago, she wanted to provide more accessible therapy services. At the time, Google searches were not a big thing. So, with her marketing background, Mio was able to put up her website in a short period, and it gained a lot of traffic.

The ways to market online have expanded since Mio first started. One thing Google looks for with SEO is the age of the website. Mio has had her website up for ten years. It gets a lot of traffic and ranks well on Google. Depending on the day, she may still come up on the first page results. For people starting now, Mio says SEO is going to be tough; there are so many more people online these days. However, you need a website because it’s a 24/7 business card.

When Mio first started her practice, she immediately wanted to think of ways to diversify her income sources because Google can be unreliable. At any given time, Google can decide not to rank your website well. A few months ago, Google changed their algorithms, so Mio’s website dropped. Plus, Mio didn’t want to rely solely on client work. Think of it as a table; you want to have four solid legs that provide you with a solid foundation. Mio has done consulting work and workshops to help diversify her income. Currently, Mio is working on establishing an online business, that’s one of the reasons why she contacted Pat Flynn.

People are surprised to hear Mio has challenges with verbal fluency. It takes a lot of internal work for Mio to speak and get her ideas across. Inside there is a lot of action happening. Pat Flynn offered Mio access to his Power-Up Podcasting® course, which helped out immensely. Figuring out podcasting on your own can be challenging, so having the steps laid out is extremely helpful. If Mio didn’t get the push from Pat and the resources he provided, she would be overwhelmed and still trying to figure it all out. You can listen to Mio’s podcast HERE.

Be on Mio’s Podcast: mio@solidwellness.org

AP 1081: Where Do I Start to Build an Audience and Community Online?